You are here:
Allgemein 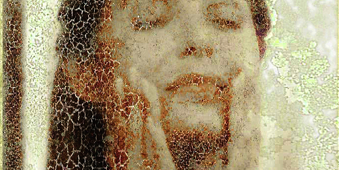 Farb & Rausch Space Gallery welcomes you to our video-art night

On February 18, 2014 starting at 7.30 pm, students of the Berlin University of the Arts (UdK) will present video-artwork of Christoph Girardet & Matthias Müller as well as Zeynep Tuna.

“Hide” (DVD loop, 4:3, colour, sound, 7’40”, 2006) by Christoph Girardet & Matthias Müller. In this film, the two artists used predominantly found footage from commercials of the beauty industry. Young and perfectly beautiful women act in those TV commercials; auto-eroticism and seductive expressions on their faces are often used elements of the genre. Repeated moments of the women’s hands touching their bodies and touching the beauty products are shown; those sequences are replayed over and over again at very short intervals. After some time, it seems as though the beauty products have an impact on the footage. Its surface is destroyed, it crumbles, the colours are changing. Something sinister is produced and emerges from the cracks in the appearance.

Sinister motives also play a significant role in Zeynep Tuna’s “Gebrochene Sinnlichkeit” (Broken Sensuality). In her final project of her Art in Context studies at UdK Berlin, the Turkish artist also used found footage: She worked with material of Turkish sex films of the 1970s and 80s which she discovered online and in Istanbul’s pirated copies milieu. Disguised as comedies or melodramas, they survived censorship through the 80s thanks to the removal of all sexual content before their permission; it was re-embedded afterwards. Zeynep Tuna created her own version of sex films. She also used the technique of repetition; she questioned the depiction of eroticism and sexuality and the presentation of women in films. Her reinventing the material focuses on men’s views and female bodies. Similar to Girardet & Müller’s “Hide”, Tuna’s material is depicted in repeating sequences. However, it isn’t presented in a circular way but in chapters. Given that certain characters, gestures and gazes appear over again, there is a particular amount of circularity in her work as well.

Artist in Residence and Certification at the Xylon Museum Schwetzingen
02.08.2022
Go to Top